It’s been described as the coolest road in the world and, in light of new drone footage, few would dispute that assessment.

The highway in question is none other than the A302 near the Dutch city of Harderwijk. Located on the outskirts of the Netherlands, it connects the mainland with a neighbouring island called Flevoland.

The latter is said to be the largest artificial landmass of its type, which seems apt given the incredulity of the route in.

For this stretch of motorway gives the impression that cars are submerged underwater. Yes, really.

An incredible feat of engineering is best viewed from up on high. See for yourself.

This is, of course, an illusion.

In reality an 80 foot bridge supports the weight of the surrounding river, elevating it above traffic.

How you ask? Well, this superstructure relies on 22,000 cubic metres of concrete and steel sheet piles.

It’s strong enough to facilitate the flow of water and the passage of boats.

Above there is room enough for pedestrian walkways and cycle lanes. Better still… there is no spillage onto the road below. That’s what you call precision engineering.

The majority of highway sits above sea level, owing to a series of artificial embankments.

But for a 56ft section, the reverse is true, with motorists taking the road (or waters) less travelled.

The Veluwemeer Aqueduct is much celebrated.

It cost £45m to erect and was deemed more appealing – both visually and financially – than a standard drawbridge or ferry stop. Underwater tunnels and high bridges were also considered but where’s the fun in those?

All of the aforementioned ideas were also deemed too obstructive to the existing landscape which was to be maintained.

So… given the N302 is a major highway, planners got seriously creative in a bid to facilitate the constant flow of traffic. Congestion was to be avoided at all costs.

Work was started in 1998 and completed within four years. On reflection that is a quite remarkable turnaround given the scale and ambition of the project. 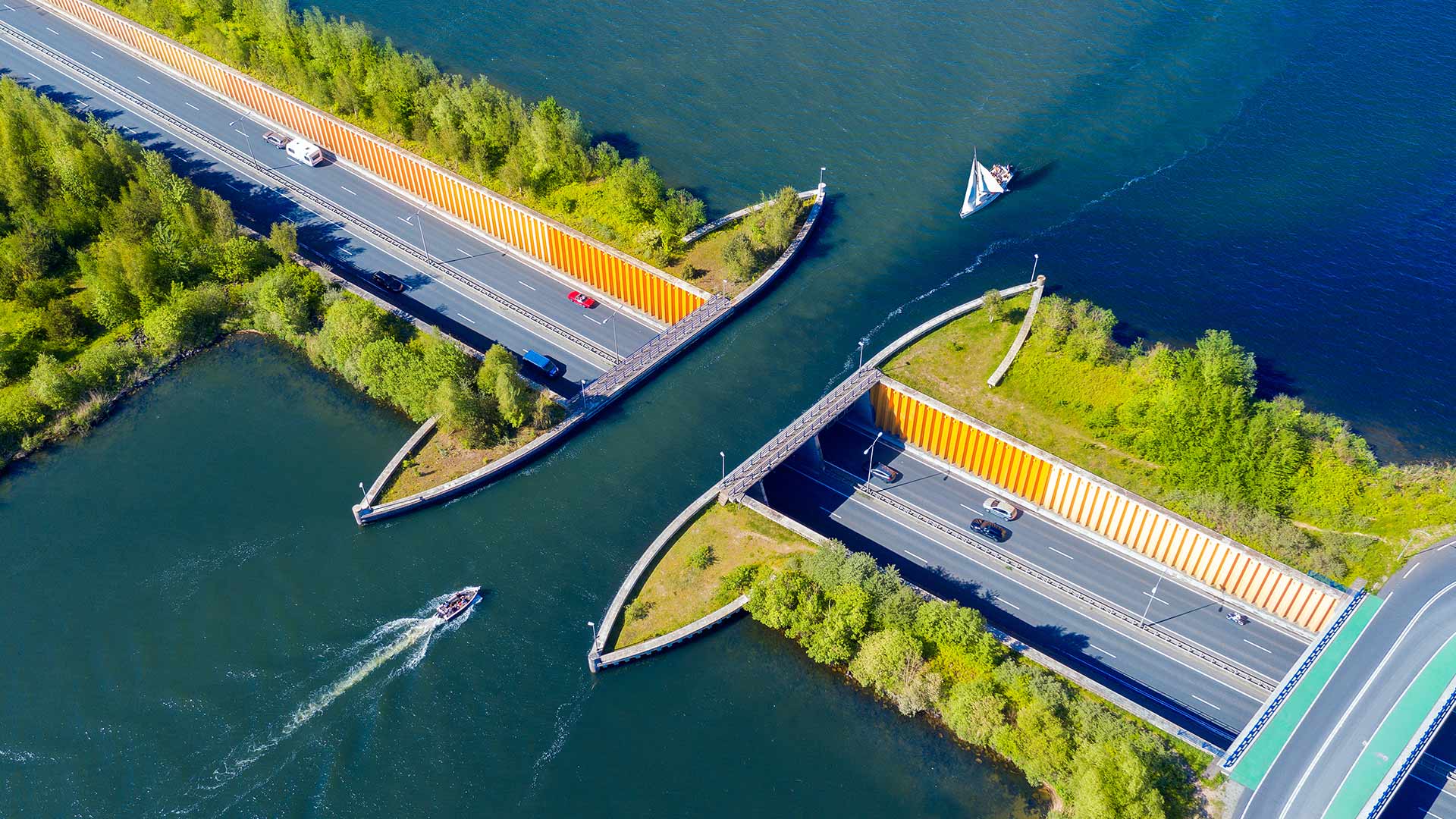 The Vakuweemer Lake itself is one of 14 neighbouring lakes born from the separation of Flevoland and the Northeast Polder into the Netherlands.

Flevoland is famous for being constructed from reclaimed land. It is flanked by three man-made lakes and comprises two drained sections, those being Flevopolder and Noordoostpolder. It is the 12th youngest province in the region and spans 970 km2.

Its local aqueduct, whilst becoming somewhat of a tourist attraction, also holds the title of the shortest anywhere in the world, being just 25m long and 19m wide.

Its makeup is heavily reliant on the anchored steel sheet piling referenced above, which holds back sediment from the roadway, allowing it to duck beneath the water line itself.

Whereas the same materials are used in the installation of cofferdams for underwater construction projects, in this instance its presence is a permanent one .

A common and let’s face it obvious question is how the water bridge holds the additional weight of passing boats? This is the result of a principle called Archimedes.

In short, it sees a floating object displace a volume of water of equal weight. Because the bridge is open ended, this sees water pushed outwards – maintaining equilibrium.

It’s not everyday you see a road hold a 10-foot deep canal. The sight of water floating above a dual carriageway takes some getting used to, given the reverse is so often true.

As optical illusions go, it’s one of the best anywhere in the motoring world.

Unsurprisingly a special viewing platform has been set up on a nearby sidewalk, a great vantage point to view a quite remarkable piece of engineering and one worthy of MAT Foundry’s list of the greatest driving roads.

The Greatest Driving Roads In The World